In January 2012 a wildfire ravaged the 1,000 hectare Elandsberg Nature Reserve 100km north of Cape Town, South Africa – home to the Geometric tortoise (Psammobates geometricus). Where more than 200 lived before the fire, estimates suggest only 65 still survive. The IUCN’s Tortoise and Freshwater Turtle Specialist Group considers this tortoise to be one of the world’s 25 most endangered.
Margaretha Hofmeyr, professor at the University of Western Cape, received $10,000 from the Fund in July 2012 to help the surviving tortoise. Having surveyed the damage, collected and hatched eggs, built protective enclosures, and radio-tagged fertile females, Margaretha and her team have put more than 750 hours into the protection and survival of these critically endangered tortoise.
Dr Hofmeyr recently submitted a comprehensive interim project report to the Fund. We thought you might be interested in reading more about the status of the project. Here are some excerpts from the Geometric tortoise project report submitted 20 May, 2013
Project Report Excerpts
The winter in 2012 was wetter and colder than usual; consequently, we could not start the hatchling and camp tortoise surveys before October 2012. We spent 754 person-hours doing surveys, which excludes the time dedicated by the intern working full-time on the tortoises. We did not survey the entire burnt area but covered approximately 28% of the habitat (280 ha), which was known to have the highest tortoise density before the fire. We did not find a single geometric tortoise hatchling in the burnt habitat.
The absence of geometric tortoise hatchlings in the burnt habitat can probably be ascribed to hatchling predation combined with low hatching success due to the effects of the fire on tortoise nests.
We found several live, adult geometric tortoises during the surveys, which allowed population density estimates. Current tortoise density in the burnt habitat (including small, vegetated islands) was 0.065 tortoises per hectare, compared to 0.225 tortoises per hectare before the fire.
Our findings on hatching success and low tortoise density in the burnt habitat indicate that the status of geometric tortoises is even direr than originally anticipated. Consequently, the need to bolster wild population size by headstarting juveniles from captive females became of increasing importance.
I assessed the health of 40 tortoises in October 2012 and of 33 tortoises in April 2013. October results showed that tortoise body mass increased by 9% relative to baseline mass and that 81% of 21 females were gravid. Radiographs in April 2013 showed that all females had laid their eggs, but it was not possible to assess follicle development since the ultrasound scanner malfunctioned.
We will continue searching for the remaining tortoises not yet assessed until all have been found. It is known that eggs of geometric tortoises hatch after the first autumn rains in March/April. We found five hatchlings in the camps during April and May and transferred these hatchlings to a special hatchling enclosure that protects them against avian predators. If all eggs hatched, a minimum of 30 hatchlings ought to be in the camps and we will continue efforts to find more hatchlings before they are predated by Crows. However, their small size (8-11 g) and the dense vegetation in the camps work against finding them.
The difficulty to find adults and the predation risk to hatchlings if females nest in the camps necessitate that we place radio-transmitters on all camp tortoises. As a first step towards this goal, we had 24 radio-transmitters refurbished and to date placed transmitters on 18 females found during the April/May surveys. We intend to monitor reproduction of these females regularly in order to harvest their eggs and raise their offspring in a safe environment until they are more predator-resistant before releasing them into the wild. 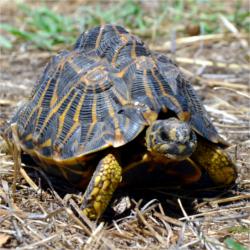