Loggerhead Turtle Tagged in Belize is Found Nesting in Mexico

In June 2013, Oceanic Society and the Environmental Research Institute of the University of Belize launched a new sea turtle tagging program at Turneffe Atoll. During a week of in-water surveys, 17 sea turtles were captured, measured, tagged, and released.

The sole loggerhead turtle captured during the surveys, an adult female, was tagged and released on June 13 near Crawl Caye in Turneffe Atoll. On July 29, biologists monitoring sea turtle nesting in Xel-Ha, Quintana Roo, Mexico (300km / 186mi away) observed her nesting and reported the sighting to authorities in Belize.

This is the first time that a loggerhead turtle has been observed feeding in Belize and nesting in Mexico. The finding gives new information about the importance of foraging habitat at Turneffe Atoll for Caribbean sea turtles, and highlights the ongoing need for regional cooperation to protect these endangered animals.

The sea turtle research project at Turneffe Atoll was launched in 2013 and aims to answer key questions about the sea turtles found there, such as: Where do they come from? What sizes and age classes are they? And, what habitats arethey using? The data generated by the project will be used to inform future sea turtle conservation efforts in Belize. The need for such data has become increasingly important following the establishment of the Turneffe Atoll Marine Reserve in late 2012.

The research was generously supported by The Mohamed bin Zayed Species Conservation Fund, the Belize Fisheries Department, and the Betlach Family Foundation. 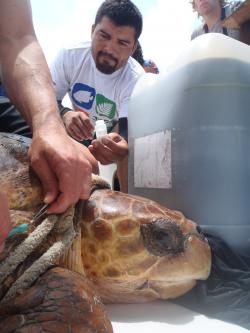