US $1.5 million annual commitment will support conservation projects for endangered flora and fauna.

This will be the first agreement of its kind in the region where corporate and conservation donor entities are collaborating to invest in preventing biodiversity loss.

Through the partnership, Mubadala will provide the MBZ Fund with US $1.5 million annually to be directed towards supporting endangered flora and fauna in Africa and Asia, with a focus on countries where Mubadala has portfolio companies including Guinea, Indonesia, Thailand, and more, representing some of the world's biodiversity hotspots. This will also be the first agreement of its kind in the region where corporate and conservation donor entities are collaborating to invest in preventing biodiversity loss.

Her Excellency Razan Khalifa Al Mubarak, Managing Director of the MBZ Fund, commented: "The importance of biodiversity conservation is a priority for countries across the globe, and we are excited to enter this strategic partnership with Mubadala to tackle this issue. With this agreement, we are retaining and restoring endangered species globally, thereby underscoring the importance of the private sector in protecting our ecosystems and paving the way for a better future for the next generations. This strategic relationship will also contribute to positioning Abu Dhabi regionally and globally as a leader in combining corporate and conservation funding to make a tangible difference worldwide."

Commenting on the partnership, Ahmed Al Calily, Chief Strategy and Risk Officer at Mubadala, added: "As a responsible global investor, we care deeply about the communities we operate in and are proud to partner with the Mohamed bin Zayed Species Conservation Fund based on its history and legacy in protecting endangered species around the globe. This new partnership will further strengthen our existing community investment programs and help our efforts to address critical issues such as biodiversity and species conservation, which is aligned with our commitment to making long-term sustainable decisions that positively impact local and global communities."

The partnership is focused on mitigating the threats to endangered species and their habitats in three countries, Guinea, Indonesia, and Thailand. In Guinea, funds will be directed to preserving endangered marine species including critically endangered marine turtles, the Atlantic humpbacked dolphin (Sousa teuszii), and the African manatee (Trichechus senegalensis).

In Indonesia funds will go towards supporting the marine ecosystem, in particular coral reefs and seagrass, in the Makasaar Strait, as well as terrestrial ecosystems through wildcat conservation in Aceh Province. Furthermore, in Thailandthe support will focus on migratory wading birds - in particular the Spotted greenshank (Tringa guttifer), and their mud-flat and mangrove habitats in the northern Gulf of Thailand, and the Smooth-coated otter (Lutrogale perspicillata), as well as other freshwater species located at Kaeng Krachan National Park. 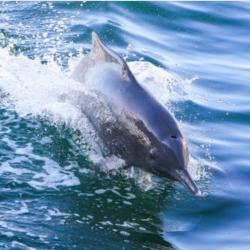