Peru surprises with 2 new amazing species of woodlizards
Thursday, March 21, 2013
Press Release
Two new woodlizard species have been uncovered from poorly explored areas of the Peruvian jungles. The males have beautiful body colouration with a distinctive green pattern before a dark brown and black background. It is assumed that the two species share the same territory, with only a slight difference in altitude ranges, which makes their biological divergence intriguing from an evolutionary point of view. The study was published in the open access journal Zookeys.
Being traditionally regarded as a group with a low species diversity, recent fieldwork on Enyalioides has increased the species richness considerably with three of the ten known species described in last 5 years. The new members of this still poorly known group of animals have been discovered during expeditions on both sides of the Andes' slopes, parts of Ecuador and Peru. This success rate suggests that more of these lizards might be awaiting discovery in other unexplored areas of the region.
The two newly described lizards were found in Cordillera Azul National Park, the 3rd biggest national park in Peru protecting the largest mountain rainforest in the country. The area includes some of the least explored forests in Peru. The basins of the rivers Pisqui and Pauya in the National park are remarkable with their great diversity of reptiles and amphibians.
One of the new species, Enyalioides azulae, is known only from a single locality in the mountain rainforest of the Río Huallaga basin in northeastern Peru. It was named after the Spanish word "azul" (blue) referring to the Cordillera Azul National Park where this species was discovered. The second newly described lizard, Enyalioides binzayedi, can be seen in the same river basin and is named after the sponsor of the field survey HH Sheikh Mohamed bin Zayed Al Nahyan, Crown Prince of Abu Dhabi and Deputy Supreme Commander of the UAE Armed Forces, who created the Mohamed bin Zayed Species Conservation Fund (MBZSCF).
"Thanks to these discoveries, Peru becomes the country holding the greatest diversity of woodlizards. Cordillera Azul National Park is a genuine treasure for Peru and it must be treated as a precious future source of biodiversity exploration and preservation!", says the lead author Dr Pablo Venegas from Centro de ornitología y Biodiversidad (CORBIDI) in Lima, Perú.
Reference
Venegas PJ, Torres-Carvajal O, Duran V, de Queiroz K (2013) Two sympatric new species of woodlizards (Hoplocercinae, Enyalioides) from Cordillera Azul National Park in northeastern Peru. ZooKeys 277: 69, doi: 10.3897/zookeys.277.3594 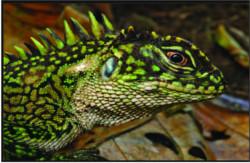