The Mohamed bin Zayed Species Conservation Fund has awarded 257 grants for this species type, constituting a total donation of $1,995,546. 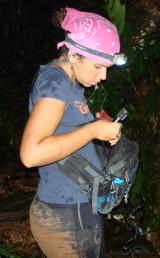 We want to improve occurrence probability estimates, and evaluate habitat conditions of Dendropsophus amicorum, an endemic and data deficient amphibian species from Venezuela. We will implement visual encounter, and automatic recorder surveys in nocturnal line-transects at their type locality, Cerro SocopÃ³, which is a small and isolated mountain that represents a relict of non-protected cloud forest at central-west region of the country.

The Valcheta frog (Pleurodema somuncurensis) is a Critically Endangered species that inhabits the thermal springs of the Valcheta stream (Somuncura plateau, Patagonia-Argentina). With a distributional range of less than 20km2, this species are facing several threats that make its population in deline. The goal of this project is to promote effective conservation of the Valcheta frog and its habitat.