The Mohamed bin Zayed Species Conservation Fund has awarded 257 grants for this species type, constituting a total donation of $1,995,546.

Melanophryniscus admirabilis is a splendid, Critically Endangered species, with a highly restricted distribution, endemic to one location. The species distribution is located in a region particularly vulnerable. Our project aims to generate data on population size, reproductive ecology and genetic variability and structure, which are key factors to establish management priorities and standards procedures for monitoring this highly threatened ...

We sampled eight mountains in Southern Bahia, Brazil, in search of the Flea-Toad, the smallest amphibian of the American continent, described in 2012 from the Serra Bonita. Despite extensive sampling activity we only managed to find the Flea-Toad on the Serra das Lontras mountain, a National Park neighbouring Serra Bonita. However during the fieldworks 14 new frog species were discovered.

Holdridgeâ€™s Toad is endemic to Costa Ricaâ€™s cloud forest. They suffered a dramatic decline and were last observed in 1984, it was recently rediscovered after 25 years since its last observation. This project aim to know potential threats like of Bd, small population size and lack of protection of the site, for to know the current conservation status.

Globally, amphibians are threatened by the fungal disease chytridiomycosis, which is killing frogs around the world. To date, it has not been found on Madagascar which is home to over 400 species of frogs. This project will sample Madagascar amphibians to select effective probiotics in order to develop a proactive conservation response for the impending arrival of the deadly amphibian pathogen in Madagascar.

This project works on informing local people engaged with Cave Salamander (Paradactylodon gorganensis) which is an endemic species to Iran (family Hynobiidae) . This species is listed as a Critically Endangered species in IUCN red list. Another aspect of this project is training professions of the Department of Environment(DOE), university professors and students and teachers to help us in teaching local people in near future.

It is now established that the chytrid fungus (Batrachochytrium dendrobatidis) is present in a population of an Indian night frog (Nyctibatrachus sp.) in the Western Ghats. It is imperative to randomly test populations of freshwater frogs across the Western Ghats and develop conservation strategies to ensure survival of populations and species of endemic and threatened amphibians of the Western Ghats. 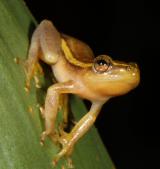 Pickersgill's Reed Frog, Hyperolius pickersgilli, is endemic to the coast of KwaZulu-Natal, South Africa and known from only 18 sites. It is globally Critically Endangered due to severe habitat fragmentation and ongoing decline in the quality of remaining localities. The Pickersgill's Reed Frog Recovery Project aims to protect key habitat through engaging with all relevant role players and creating awareness about this unique species.

The effects of climate change on amphibian population in Brazil are poorly understood. This project will develop a long-term monitoring protocol to evaluate the effects of climate variables on populations of a new mountaintop amphibian species at Pico do Itambe and will address future conservation priorities focusing highland ecosystems within the EspinhaÃ§o Range, at Southeastern Brazil.

This project proposes to save the last remaining population of the Critically Endangered Togo slippery frog from extinction. Specifically, different site based actions including increasing national awareness among strategic stakeholders in relation to the threats of mining in the area; developing local capacity to effectively promote and manage conservation of the target species; monitoring population trends of the Togo slippery frog in the Atewa ...