The Mohamed bin Zayed Species Conservation Fund has awarded 212 grants for this species type, constituting a total donation of $1,602,228.

My research focuses on taking a metabolic and physiological approach to find markers for resilience to climate change stress in the critically endangered coral, Acropora cervicornis. Specifically I am looking at tissue lipids and carbon and nitrogen stable isotopes to determine how energy is allocated under stress in this species in order to have a better understanding of how to conserve it.

The Australian Crayfish project was established with the aim of addressing specific knowledge gaps on all Australian crayfishes. With the assistance of the Mohamed bin Zayed Species Conservation Fund we are researching a unique small freshwater crayfish Euastacus clarkae that is only known to occur in a small highland section of Australiaâ€™s world heritage listed, Gowandan Rainforest.

Kauri Redcoat Damselfly (Xanthocnemis sobrina) is endemic to the New Zealand North Island. It is the only representative of its group in the country that is assessed as Data Deficient after the most recent IUCN Red List evaluation. The assessment was based on uncertainties around the species taxonomy and current conservation status.

Pollinators are critical components of our environment and essential to our food security, contributing to one in three bites of food that we eat. Bumble bees are among the best known pollinators, yet their conservation status remains largely unknown. We are evaluating the status of 43 species of North American bumble bees using the IUCN Red List Criteria.

The Amani Flatwing is one of the world's rarest dragonflies, threatened with extinction due to its restricted range and its small population in the Usambara Mts. To secure the species' survival on earth a workshop was jointly organized by Eustack Mtui from theTanzanian Forest Conservation Group (TFCG) and Dr. Viola Clausnitzer from Senckenberg, Germany.

Anisomeria bistriata is endemic to Juan Fernandez islands in the Pacific, off the Chilean coast. It has, to our knowledge, not been surveyed in over a century. Our goals therefore are: - Visit the islands to establish if the species still exists. If so: - Describe its adult and if possible larval habitat. - Assess to which degree the species faces anthropogenic threats. 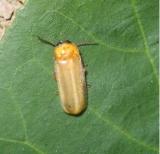 Very little is known about the fireflies in the Kuala Selangor Nature Park (KSNP). The KSNP lake system is undergoing rehabilitation. These changes may have an impact on the fireflies. The firefly study and habitat mapping will aid in the Park management, where the fireflies can be a bio-indicator. A monitoring program and awareness materials will be developed. KSNP is a Congregating Firefly Zone (MBZSCF:0925338).