Mystery Amphibian Rescue and Conservation: The Rebirth of Irangi and Sagalla frogs in Kenya 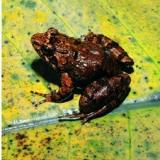 Phrynobatrachus irangi and by extension many amphibians represent the principal model of the crisis in modern biodiversity because apart from being the most threatened and rapidly declining vertebrate group, they are disappearing from their habitats on a global scale. P. irangi not only serves to show how, propose mechanisms to address the issues but through the community based conservation of the frog gives an outright success story. Only when the problem is addressed from the root that it is mitigated sustainably and only when the people who matter work together in addressing the issues surrounding species conservation such as competition with alien species, increased ultraviolet radiation, global warming, emerging infectious diseases, habitat loss due to land use changes and pollution and other potential stressors that the mammoth of loss of biodiversity shall get extinct. There is hope for P. irangi with reduced clearing and conversion of grasslands, wetlands and forests and the ongoing measures that encourage coexistence and transform agricultural areas a biome that is an essential habitat for amphibians.
Phrynobatrachus irangi is the largest puddle frog in East Africa. It is labeled in the IUCN Red list as an endangered species and is threatened to habitat loss. The loss and destruction of the habitat where this frog lives is blamed largely on the community through their robust agricultural and forestry practices within and around the forest. With a seed grant of $4886 from Mohamed Bin Zayed Species Conservation Fund, this project was established which was received warmly by the Irangi Frog Community and local organizations. Through this effort, the project has established the largest community based conservation movement in Embu County, which is 150KM north of Nairobi, Kenya's Capital.