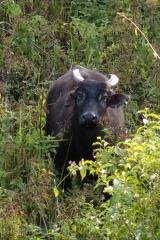 The island of Mindoro in the Philippine Archipelago is considered as a biodiversity “hotspot” and important center for endemism. It is importantly home to the tamaraw (Bubalus mindorensis), a dwarf buffalo solely endemic to the island and the only wild cattle species living in the Archipelago.

Originally widespread across the island, the tamaraw has suffered from heavy hunting and continuous habitat destruction during the last century. It has gradually been confined within the mountainous interior of the island. The species is now listed as Critically Endangered on theIUCN Red List of threatened species.

As of today, three subpopulations of tamaraw are known to survive on Mindoro; Mt. Calavite Wildlife Sanctuary subpopulation in the north, Aruyan-Malati Tamaraw Reservation and Mts. Iglit-Baco National Park located in the center of the island. Nevertheless and despites conservation efforts and its protected status, the best chance for tamaraw survival seems to be more and more limited to the so called "core zone of the monitoring", which concentrate most of the conservation efforts. This area covers less than 16 000 hectares at the south-west edge of Mts Iglit-Baco National Park. Situation elsewhere is unclear or critical.

Mindoro is also the Ancestral land of the Indigenous People (IPs) called Mangyan and original inhabitants of the island. They have been progressively pushed toward the mountainous interior due to lowlander settlers coming from other provinces. Somehow, they have followed the same entrenchment pattern than the tamaraw. Some Mangyan communities are already well connected with lowlander Mindorenos while other tribes remain very elusive maintaining traditional lifestyle, their subsistence being based on natural resources and slash and burn agriculture.

Mangyan tribes are preserving their cultural identity thanks to the progressive "Philippines Indigenous People Right Act" (IPRA, 1997). Nevertheless, their knowledge, customs and vision are not well understood, thus preventing a peaceful, consistent integration toward long term land management. They are highly dependent upon the preservation of natural resources of the Inner Mindoro Mountains for their subsistence. Moreover, most of their territories stretch on the natural range of the tamaraw. They are therefore the main stakeholders connected to the species conservation and environmental issues on Mindoro. The boundaries and recognition of their Ancestral Domain is on process.

Since 2012, the French non-profit organization Noé Conservation, in partnership with the Filipino NGO D'ABOVILLE Foundation, is developing a long term socio-environmental program on Mindoro. The "Tamaraw Program – Conservation and Enhancement of the Natural Heritage of Mts Iglit-Baco National Park" aims at implementing consistent solutions to save the Tamaraw in the wild while respecting the residing human population and improving their livelihoods. The program focuses its efforts on the two adjoining subpopulations of Mts Iglit-Baco National Park and Aruyan-Malati Tamaraw Reservation.

As part of the first component of the Program (improvement of knowledge about the park’s biodiversity and its natural and socio-cultural context), two key activities have been carried out:

b)    Close study: Ecological assessment of the two residing tamaraw subpopulations - core zone of the monitoring and Aruyan-Malati Tamaraw Reservation

Eight exploration missions were carried out during the dry season (January to May) from 2012 to 2015 in order to assess the presence of tamaraw beyond the limits of the core zone of the monitoring. Nearly 60 000 hectares of under-surveyed or un-monitored areas have been covered.

Besides, several meetings, workshops and consultations with the Park’s rangers and Mangyan tribal leaders from residing communities have been carried out to assess the situation in the region and to identify the main threats affecting wildlife nowadays.

These activities were consolidated and organized with data gathered by the Department of Environment and the Park’s management since two decades. These activities have also greatly helped to gather further information on the current situation regarding the natural habitat and the socio-cultural context of the inner Mindoro Island.

Results show that the species is no longer present in many areas where it was still reported in recent years. The Aruyan-Malati Tamaraw Reservation subpopulation, that once gathered a significant population, is declining rapidly with a 60% decrease of the area of presence in the past two decades and probably less than 12 remaining animals today. This subpopulation is in a critical situation. Moreover, the area of presence of the species within the core zone of the monitoring (Mts Iglit-Baco National Park subpopulation) is progressively shrinking and may currently cover no more than 2000 ha (3% of the PA). No tamaraw have been assessed elsewhere within the Park.

Poaching activities from lowlander Mindorenos appears to be an important threat to wildlife and substantial cause of disturbance within IPs’ territory and the Park itself. Mindoro warty pig andPhilippine brown deer are the main target but repeated cased of poaching on tamaraw have been reported in the last years. In addition, traditional hunting by IPs, especially snare trap and pitfall trap methods are a direct threat to tamaraw even if the species is not directly targeted.

Slash and burn agriculture is the main structuring factor of the natural environment in mid elevation areas occupied by IPs. It creates a mosaic of habitats that can provide attractive places for wildlife. However, the impact of such land use pattern might have reached a thresholddue to the continuous growth of the Mangyan population on the area of investigation. It might have become a hindrance for the survival of tamaraw and detrimental for the natural environment.

In the current context, it is assumed that (a) the level of disturbance, (b) the shortage of safe places and (c) the lack of connecting natural corridors are the main limiting factors restricting the range of tamaraw. Animals are concentrating within the core zone of the monitoring, the last known safety area for the species. 405 animals were counted within the area in April 2015 (269 in 2005). This amount contrasts with the absence of the species elsewhere. Therefore, this restricted area shelters nearly 96% of the whole tamaraw population of Mindoro

Thanks to the endeavor of the Park's rangers and the actions of the Philippine Government through its banner program, the “Tamaraw Conservation Program”, a viable population of tamaraw still exists. Nevertheless, the future of the species requires further efforts to go beyond the limits of the actual core zone of the monitoring and to expand its area of presence to its most recent range, which consists in areas currently occupied by Mangyans. Besides, AMTR subpopulation needs immediate protection efforts to stop its decline. It is therefore crucial to (1) cope with the dramatic lack of law enforcement as well as to (2) seek for innovative actions andintegrated management solutions with respect to the rights and subsistence needs of the indigenous population.

The Tamaraw Program combines a multi focal approach to tackle these challenges. As of now, Noé Conservation and the D'ABOVILLE Foundation have also carried out complementary activities to consolidate the scientific approach and conservation efforts. The development of an innovative land-use co-management model, the “Mangyan Tamaraw landscape” has been proposed and endorsed by the local stakeholders and the concerned communities. This shall push through the progressive establishment of a dedicated ICCA (Indigenous Community Conserved Area) in the area of the core zone of the monitoring in order to ensure wildlife conservation while preserving and respecting Mangyan rights and claims.

Besides, the project greatly support the efforts of the local stakeholders to proclaim the AMTR as “Critical Habitat” and to reclassify MIBNP as “Natural and Biotic Area” in order to harmonize with the NIPAS legislation and meet the social issue of this protected area.

Furthermore, communication and ecotourism development were important side objectives as part of the third component of the program (creating incomes generating activities to sustain the Park’s management and development); various media coverage, awareness / education events, and initial collaboration with Tour Operators to launch trekking tours inside the Park were conducted.

Thus, the Tamaraw Program has already provided essential information and substantial results, but must be continued to achieve its objectives aiming at developing and implementing a Park's Management Plan and a Tamaraw Conservation Strategy, while generating incomes to sustain conservation efforts.