Description, ecology and natural history of a endemic new species of butterfly (Lepidoptera: Lycaenidae) from coastal desert of Peru

Understanding the ecology and conservation priorities of the endangered Ghatophryne ornata (Gunther,1876) through research and community participation.

Bristol Zoological Society is leading a vital project to save the Critically Endangered Negros bleeding-heart dove (Gallicolumba keayi), a species endemic to Negros and Panay island in the Philippines. Habitat loss and poaching are responsible for the decline of this elusive species. The population survey and threats mapping of the area will be critical to create a Conservation Action Plan and implement evidence-based conservation actions. 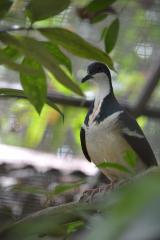 There is scant information on Indian pangolins in Bardia district of Nepal. We established baseline on the presence/absence of Indian pangolins and characterized environmental variables associated with their habitat (burrows) in selected community forests in the buffer zone of Bardia National Park. Importantly, we also built and strengthen the capacity of local communities in pangolin conservation by conducting trainings and outreach programs. There is a newly discovered population of the Central American spider monkey (Ateles geoffroyi) in eastern El Salvador. Recent research has demonstrated that the spider monkeys from this region are genetically unique and also critically endangered. Through regular observations of the spider monkeys and by mapping their range, we are creating a foundation for future, long-term conservation efforts.

The oncilla or tigrina is a rare small wild cat listed as vulnerable by the IUCN Red List, and as endangered by the Costa Rican environmental authorities. In this project we will define priority areas for the conservation of oncilla at the time we will also assess the conservation status of this probably unique species endemic to the highlands of Costa Rica and Panama.

Filling the gap of knowledge for a science-based assessment of the conservation status for an iconic species (i.e. Welwitschia mirabilis).

Conservation of a critically endangered African violet through the management of its pollinator diversity in Taita Hills, Kenya