Petropedetes dutoiti is Critically Endangered, known from its type locality on the Kooitobos River in the northeast of Mount Elgon in Kenya; and a site along the Suam River dividing Kenya and Uganda at a base of Mount Elgon. Repeated surveys in and around the type locality have not been successful. This will be an extended survey to further determine the species current status. 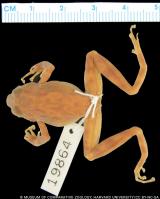 Save the habitat of Tahiti Monarch from the invasive Miconia calvescens

Protection of the pink river dolphin "Inia geoffrensis" and conservation of his habitat in Peru. 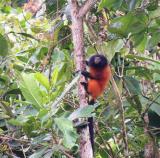 Conservation of the endangered mussel Unio crassus in the Southern Bug River (Ukraine), which is under threat of hydrotechnical construction

Assessment of distribution and conservation of the giant African millipede Pelmatojulus tectus re-discovered after 120 years in Littoral forest, Cameroon