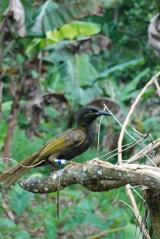 Apalis fuscigularis is one of the rarest birds in the world, with a population of

Killer whales at Subantarctic Marion Island, predate on a range of marine vertebrates associated with this island. Their impact on these species is largely unknown due to a lack in knowledge of their local ecology. While abundance and occurence patterns at the island are reasonably well known, their movements, kinship, behaviour and diet remain poorly understood. The population seems insular, increasing their global conservation importance.

ZSLâ€™s Amur tiger conservation work is concentrated in and around Lazovsky Nature Reserve; a key habitat for tigers. To ensure that the Amur tiger is not lost to extinction, ZSL is implementing a conservation programme combining population monitoring, anti-poaching measures and public engagement. By detecting trends in the tiger population and taking action in response, we hope to secure the future of these big cats.

The discovery of oil in Equatorial Guinea has resulted in a dramatic economic boom. As wealth has increased, so has demand for bushmeat. The threatened black colobus monkey is a preferred target among hunters and populations have undergone rapid declines. ZSL is conducting research to identify culturally acceptable and economically feasible alternatives to bushmeat to reduce pressures on black colobus and other threatened species.

Wildlife Alliance is working to protect the endangered Sunda pangolin by combating the illegal wildlife trade from Cambodia into Vietnam, rescuing and caring for pangolins in trade, and building public awareness about the pangolin's conservation status. For more information on Wildlife Alliance and its conservation programs, please visit www.wildlifealliance.org

In 2011-2012, I conducted transect surveys in 10 sites in Nakai Nam Theun National Protected Area (NNT NPA), central eastern Laos. At each site, I walked transects and recorded douc groups sighted, and signs of threats. I used both Distance Sampling and a habitat suitability model to estimate the abundance and distribution of red-shanked doucs (Pygathrix nemaeus) in NNT NPA.