In order to increase the population of the endangered Mary River turtle (Elusor macrurus)Tiaro Landcare Group are monitoring key nesting banks in the Mary River, Queensland, Australia. Individual clutches are identified and protected. This will greatly reduce the impact of predators. Our group is working with a PhD candidate from the University of Queensland who is researching the nesting biology of this species. 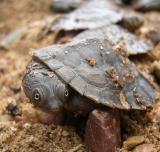 Our proposal is to conduct an Amphibian Ark Conservation Needs Assessment Workshop (http://www.amphibianark.org/conservation_needs_workshops.htm) for the entire Caribbean region. The workshop will be facilitated by an AArk Taxon Officer and led by the Caribbean Regional Co-Chairs of the IUCN/SSC Amphibian Specialist Group.

The Atlantic humpback dolphin is among the planetâ€™s most rare and threatened marine mammals. Endemic to West Africa, the species has declined precipitously in recent years. This project aims to assess essential life history parameters (population size, preferred habitats, threats) for the species in Gabon and Congo, and to raise awareness of the species amongst local resource managers, resource users, and the NGO community.

This projectâ€™s goal is to reduce the drivers for and control illegal hunting of saiga antelope across the Ustyurt Plateau in Uzbekistan and Kazakhstan. FFI aims to better understand migration routes and breeding grounds; raise awareness and engage local communities in saiga conservation; provide technical and resource support to state and local ranger groups to develop and implement an anti-poaching strategy; and foster transboundary ...

This projectâ€™s goal is to increase Antiguan Racer populations to at least 500 individuals on Antiguaâ€™s globally important offshore islands. FFI aims to build local capacity to design and execute the national Antiguan Racer Conservation Action Plan; manage and conserve individuals and habitats by controlling alien invasive species; and increase understanding and improve behavior among Antiguans and visitors towards the Antiguan Racer ...

One of the projectâ€™s goals is to identify priority actions with local stakeholders to protect the Western black crested gibbon at Nam Kan National Protected Area. In addition, Fauna & Flora International supported preparation of a national gibbon conservation action plan for Lao PDR with the western black crested gibbon as one of the priority species for the country.

This projectâ€™s goal is to conserve threatened tree species of the fruit and nut forests in Childukhtaron, Tajikistan. FFI aims to increase local community knowledge and raise awareness of rare and threatened tree species; build capacity of the local state forest service to recognize and monitor threatened and flagship tree species; and improve the status through propagation in nurseries for later reintroduction into the forest.

This projectâ€™s goal is to prevent the extinction of Siamese crocodiles and use this charismatic reptile as a flagship for conserving threatened rivers and wetlands in Cambodia. FFI will gain a better understanding of the status and ecology of key crocodile populations; increase protection of Siamese crocodile sanctuaries; and build awareness to conserve crocodiles and their habitats among NGOs, government agencies and the general public.