The aim of the Nigerian Montane Forest Project is to : combine scientific research with education at both tertiary and local community level in order to develop long term sustainable management of Nigeriaâ€™s montane forests. We achieve this through the running of an ecological research station which attracts national and international researchers and is run largely through the local community.

This long-term project will save the Madagascar pochard from the brink of extinction. Just 20 individuals remain in the wild, restricted to one location. A captive-breeding and a research programme have been established. Working with local communities, birds will be released within the speciesâ€™ former range. The project will also serve to encourage wider conservation of Malagasy wetlands for the benefit of people and wildlife. 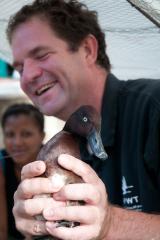 Through expeditions in collaboration with local partners, the project aims to determine the population number and threats for the migrating population of the Egyptian Vultures from the Palearctic in their main wintering areas in East Africa, to create human capacity and ensure proper design of the future conservation activities.

The Iguana Research and Breeding Staion (IRBS) is situated on the island of Utila and works to conserve the endemic, endangered spiny-tailed iguana (Ctenosaura bakeri). The grant provided by the Mohammed bin Zayed Species Conservation Fund provided helps to pay for essentials needed to maintain a good working environment at the station and supports many of the scientific studies undertaken at the IRBS.

This project aims to ascertain the present status and threats of Black softshell turtle along with other softshell turtle species in the Kamrup District of Assam, India and monitoring of habitat ecology.Efforts have been made to educate people about the significance of chelonian species and its conservation and to start a participatory conservation programme on endangered turtles.

The Panama Amphibian Rescue and Conservation Project creates assurance colonies of highly vulnerable species of amphibians to prevent extinctions due to an invasive fungal pathogen that causes chytridiomycosis.